Amy* is always wondering where she belongs.

Amy knows she doesn’t quite fit in with the purely hetero crowd (ya know… not being straight and all), but she doesn’t feel like she fits into the LGBTQ community either. I mean, the “B” is right there in the middle! Yet she never feels like she’s queer enough – like being with men disqualified her from that pride.

With so many people thinking she’s confused (or doesn’t even exist), she feels rejected on all sides. Feeling this way in the middle of adulthood, she shrinks in shame, wishing she were more clear and confident by now.

Where is the place for her where her identity gets to be acknowledged and celebrated?

She’s come out over and over, and over, and OVER again as pansexual. Yet she’s constantly judged by the gender of the person she’s dating. And every time that happens, it’s like half of her gets erased.

Alex grapples with this hidden identity. On the one hand, there’s a certain privilege in being able to hide, pass, or move through the world with fewer barriers than others at times. But on the other hand, it’s painful to feel split and unseen, flying under the radar as a big part of her goes undetected.

She enjoys being in a committed relationship, but she fears this will always mean suppressing half of herself. As life moves forward, what does it look like to be a pansexual partner or parent? How will she get to feel the full range of her sexual expression? Is being polyamorous an option?

Alex doesn’t know where to turn as she grapples with the fear that “trying to have it all” will result in everything blowing up in her face.

Sandra* never really thought she was into women…

… until that one friend. But they were just friends, right? Then why is it so confusing?

They were so close in college… nearly romantic.

But if they never had sex, does it even count?

Was it mutual… or is she just being crazy?

Is it okay or even normal to have such intense feelings for a best friend?

Sandra needs a safe, encouraging space to explore what happened, what could have been, and what comes next.

Taylor* is tired of having to explain themself.

They’ve had some good therapists in the past, but they didn’t quite get it when it came to Taylor’s queer identity.

Not that it needed to be the focus all the time, but it was frustrating to have this big part of themselves left out of their healing process. Plus, it’s exhausting having to offer so many definitions!

Taylor wants a therapy space where they can be themselves from the get-go without judgment or questioning. They want someone who understands the difference between sex, sexuality, gender identity, gender expression, and relationship style – someone who can act as a guide through the intersection of those identities.

They want to ponder the difference between feeling like a masculine woman versus a non-binary person and get more than just a blank stare.

Rosa* cringes when she thinks of all the homophobic and biphobic TV she used to watch.

It’s rare even to see a bisexual character… but it’s unheard of to have one that’s not portrayed as confused, promiscuous, disloyal, selfish, or mentally ill. Plus, think of all the storylines about the marriages that dramatically end when one partner comes out (always gay… never bi). Oh, yeah… and the gay one gets AIDS and dies after the divorce. Happily ever after, huh?

It’s no wonder it took so long to come to terms with being bi… and even longer to come out to her partner.

All this was a long time ago, yet Rosa can still feel the weight of having internalized all that bullshit for many… MANY years.

Where were all the uplifting stories about bi folks when she needed them? Rosa realizes that she needs to write her own. 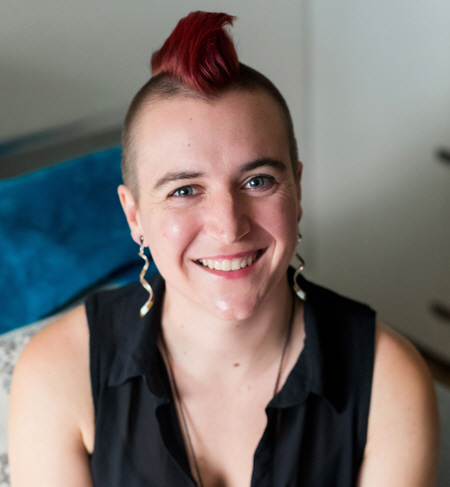 These are the types of stories that I have heard…

… not once, not twice, but many times in my experience as a therapist.

And they hit home because they are my stories, too. As a bisexual, I’ve been on my own journey, grappling with questions about belonging, labels, privilege, erasure, and authenticity… and how all this impacts my relationships with family, friends, and lovers.

At times, these questions have been intense. At other times, they feel smoother and more in the background. Either way, I’ve come to cherish this part of my identity as valid, important, and integral to how I understand myself and my place in the world.

Whether you identify as queer, bisexual, pansexual, or still working it out, your identity deserves to be honored, understood, and integrated into your larger life story.

This is where you get to be seen and felt in your full self.

Set up your first call with me today.

Schedule Consultation
*The above names and stories are composite narratives and do not reflect actual clients.